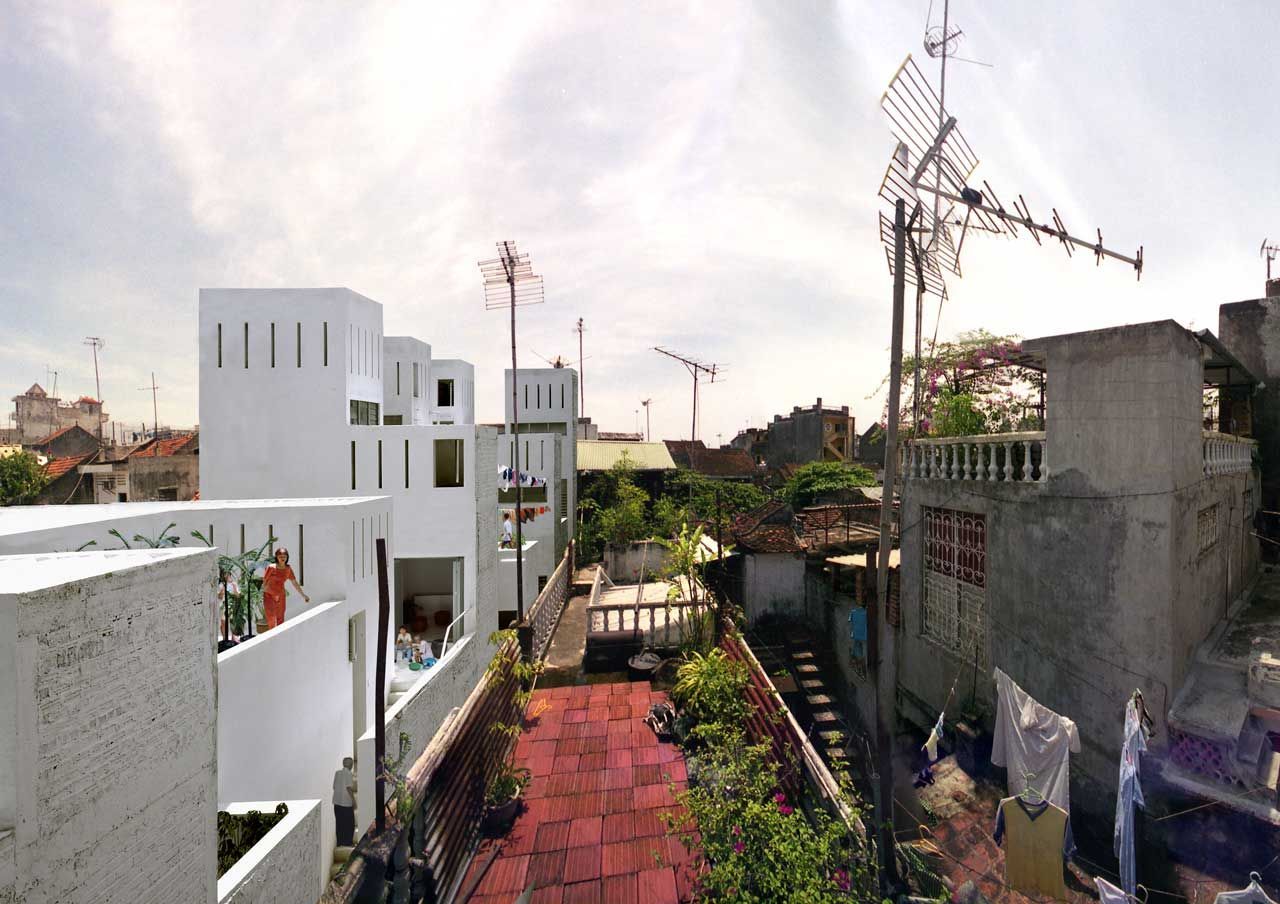 An experimental housing complex built in Hanoi, with the subject theme ‘development of a model for high-density residential quarter with low emission properties in a climate of high temperature and high humidity (Asian monsoon).’ The low-rise architecture has 4 floors, and is the basic unit making up the model for a compact city where residential density of 1000 inhabitants/ha is expected to be realized without relying on any conventional air-conditioning.
Population explosion in Southeast Asia is a significant global issue for the time to come. The decrease of productive green brought about by the urban sprawl among cities such as Bangkok typical of 20th century is exerting an impact on the earth that is anticipated to attain a substantive scale in the course of this century. In our attempt of considering a counter-model against such situation, an old part of the city called “Hanoi 36th Street district” was targeted as virtual site. The area has a vibrant charm, characterized by the extremely elongated plotting (2.5m wide, 70 to 80m deep) and a low street ratio. Residential density is high, with 1000 inhabitants/ha. The buildings are double or triple storied. With the Chinese culture as their foundation, they have lived through French Colonial period and Communism. Today the living environment requires improvement / renewal, as most of them have lost their patio for extensions to the buildings. There, we have put up a ‘porous’ space using a design method called ‘space block ’ that we have been developing, with particular emphasis on ventilation and shade, as the trial implementation of the ‘full-time ventilation cooling.’ The porous ratio here is 50%. This 36th Street now being an area whose land price ranks at the highest in the city of Hanoi, the actual construction was realized within the campus of National University of Civil Engineering. There are no openings along the longitudinal walls, for the entire building was originally conceived to the build on the oblong site on 36th Street.
The first floor is envisioned to accommodate either SOHO’s or a housing complex a housing complex (17sqm./resident) for 6 families (30 residents) with private rooms for the elderly. CFD simulation was adopted in determining the layout of porous spaces (three-dimensional patios) and openings. As a result, the space realized enjoys excellent ventilation. Living activities continue into this semi-outdoor space. The double room of PC louvers controls the effects of all the while providing ventilation through the slits. Glass louver windows, popular in Southeast Asia, are in heavy use. Some of them are converted into louvers to control direct light, with double sash.
This project is a fruit of our collaboration with many researchers from Tokyo University and National University of Civil Engineering in Hanoi.