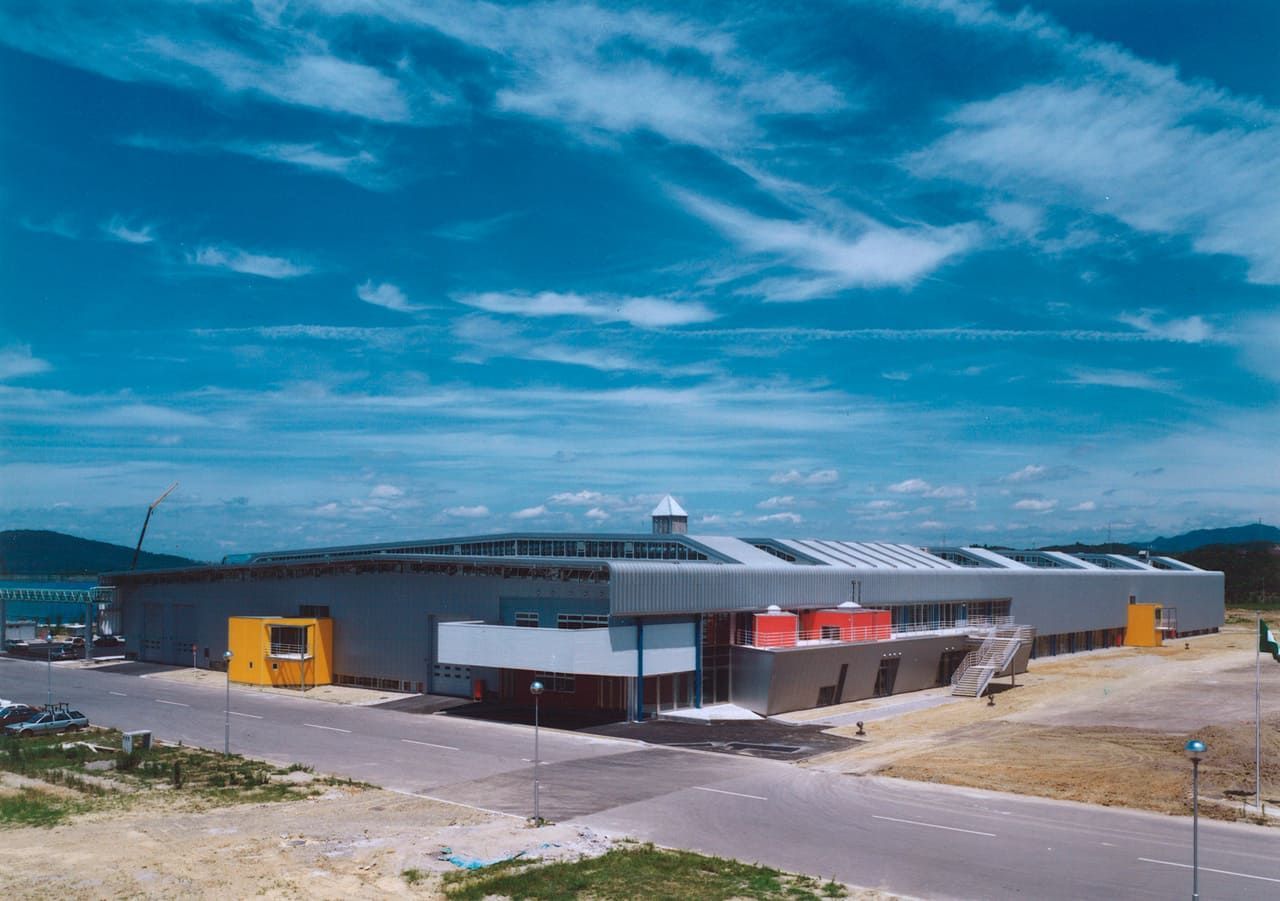 It is a factory that stands in Nishijin New Town on the outskirts of Kobe City, a new industrial park sandwiched between a residential area and a winery. It is a factory that produces "production lines for factories", such as automatic transfer carts and three-dimensional automatic warehouses. The planning of this factory required two tasks. 1. The factory itself will be a showroom of other factories as a whole. 2. How to establish positive workers in this area, where there are many attractive places for young people in the surrounding area.

We designed a factory place that can work lively. A large factory with a size of 24m and 10,000m2 has a small staff of about 15 because of the high-tech factory, so people are buried in the machine and you have to walk to talk to the next person. It is not a lonely and attractive working environment. Therefore, we reverse the conventional concept that the arrangement of people is decided on a fixed conveyor, and devised the path of the automatic conveyance truck. By this arrangement, the production line and the arrangement of people are overlapped, and a group of several people is formed, and the environment which works as a result is vivid. In addition, we set up foley for each group. The work environment has been improved by creating an environment where people can take a break or eat while touching the outside air.

A courtyard in the center of the building, windows around the foot of the exterior wall, top lights and high side lights, and light gray floors. By these, even natural light was finished to the inside bright overall. Not only the beauty of space but also the reduction of environmental load can be realized. As in the courtyard, in the proposal of plans that are not traditional factory images, there was concern from clients that they would lose flexibility as a factory. However, repeated discussions with the people in charge of the production line realized a comfortable space with a sense of openness and floating.
Air conditioning is a spot cooling and a reconfigurable panel heater, which is compatible with line changes. In addition, the panel heater was painted yellow, and when looking up at the ceiling, the position of the person could be recognized instantly.
Factory space and office space fully considered each other's visual control. Even though it is an open space, it avoids interference due to differences in work, such as "It looks like the designer is sipping when drinking coffee." In addition, the visitor flow line introduced a single bridge in the center in consideration of confidentiality. Work clothes suggested a color that matches the space.
Within a year from the start of design, the construction period was as short as 9 months. The integrated roof and wall design not only makes it a good design, but also enables meetings, work periods, and cost reductions.

Many visitors come to the factory, which is full-scale and has realized a new space. Also, more than the increase in the number of visitors, the client was satisfied that the turnover rate of new graduates was zero. This was something that could not be considered at the time of good economy.
Times have changed. However, it will not change from now on that working people's liveliness and pride and branding awareness will lead to improved productivity and appeal of the corporate image.