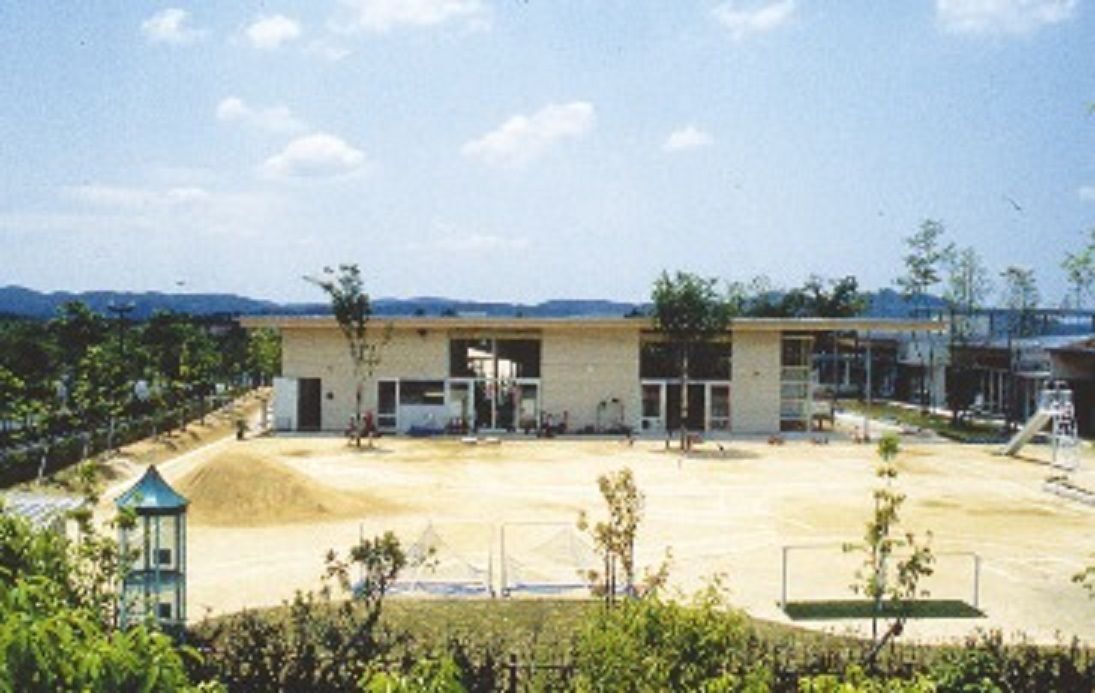 It is a wooden single-storeyed kindergarten adjacent to Kibi Kogen Elementary School. The building is made up of two straight and zig-zag wooden three-dimensional grids and a roof mounted on top of it.
The three-dimensional grid supporting the roof is a jungle gym-like structure that is a 1200 mm square module and combines pillars and beams of 100 square white wood laminated timber in three directions of XYZ. The 12φ rod was penetrated in the longitudinal direction of the beam and clamped at the end to tighten the column and beam members.
The zig-zag shaped three-dimensional grid plays a role of loosely dividing three nursery rooms and one play room. A white board, a movable panel with a sound absorption function, a shelf board, etc. can be attached to the lattice surface. By attaching and detaching them, it is possible to freely set and adjust the strength of the partition. The first stage beam of the 3D grid is at a level of 1,200 mm from the floor. Children can move freely under them. With the lowermost movable panel removed, the children will be able to see each nursery and play room as a large connected space.
In addition, the arrangement of movable panels and mobile furniture can create a hidden place in the 3D grid that was at the scale of the child. Also, children can use the slide from the top of the middle shelf board. This three-dimensional grid is also a huge playground equipment placed at the center of the active area. We expect that it will be a mechanism to trigger various activities of children in the space connected from the nursery room to the play room.
The roof that can be hung on top is made up of 2x12 beams of laminated wood arranged in one direction. As the support span changes on the zigzag grid, the pitch of the beam changes. As a result, the shadow of the beam that the light from the top light drops creates a subtle gradation on the ceiling surface.