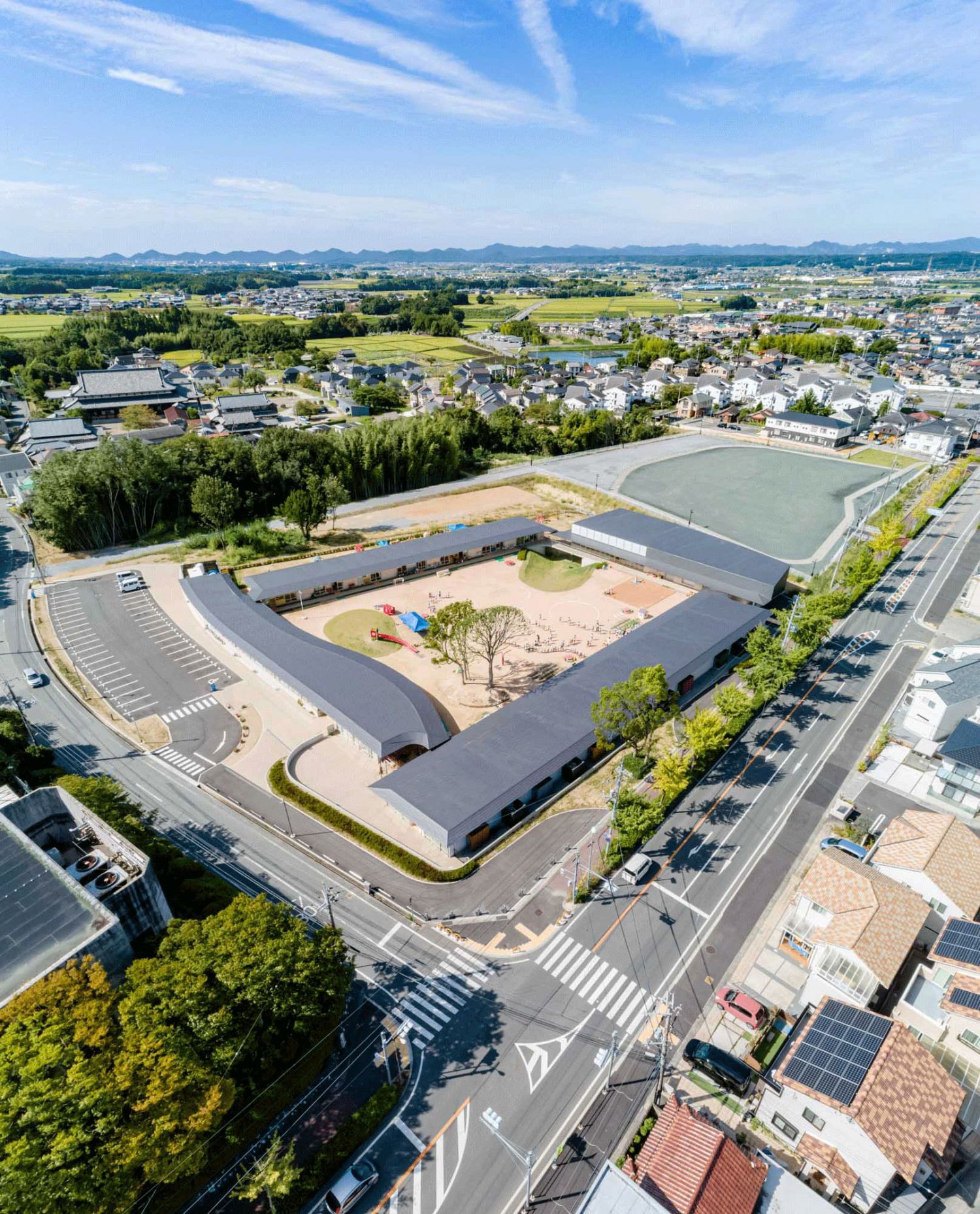 Kato Mirai Children Daycare that opens while protecting the territory of children.
This building is a kindergarten cooperation type certified children's garden newly established on the site of the former Ureshino Citizens' Training Institute in Kato City, Hyogo Prefecture.
Based on the desire for a large garden that makes the best use of the site of about 10,000 m2, the building was organized into four areas, and an arrangement plan was derived in which the large garden was surrounded by four elongated one-story buildings.
It consists of a management building in the east, which is easy to pick up and drop off by car, a long infant and baby building in the east and west, and a play building with a kitchen in the west. The roof is a one-sided roof with a deep eave, and in consideration of solar radiation control, the long north-south ridge hangs west and the east-west hangs south.
In the gaps between the buildings, the roofs protruding like beaks were piled up, and the veranda under the eaves facing the garden was looped. This corridor will be the main driving line connecting the four buildings.
If all the wooden sliding doors facing the garden are opened, the inside and outside will become a continuous living and learning environment. The classrooms are separated by water and sliding doors, and see-through from a height of about 1.2 m to the ceiling. This cross-sectional structure gives ambiguity to the cohesiveness of each classroom and the expansion of the space due to the large ceiling surface, and facilitates cooperation between classrooms.
In addition, because the building was required to change its use in the future, the structure is made of pure ramen steel, increasing the degree of freedom of renovation.
The outside activity area has four major personalities. A large garden that serves as an area for various events and activities for young children, a quiet garden exclusively for babies, a plaza where the child-rearing generation in the area named "Machikado Square" facing the multipurpose room and child-rearing support room can easily drop in, "Boken" It is a garden that descends like a mortar from the gap between the play building and the baby building, taking advantage of the height difference terrain named "No Garden".
The existing tree was left as a symbol tree on the north side of the large garden and the infant building. From the gaps in each building, you can see the children's energetic activities and the surrounding area. We aimed to create a children's garden that has a close relationship with the community and opens while protecting the children's territory. As the name implies, we are looking forward to the Kato Mirai Children's Garden, which opened this spring, as a place to build a bright future for children.