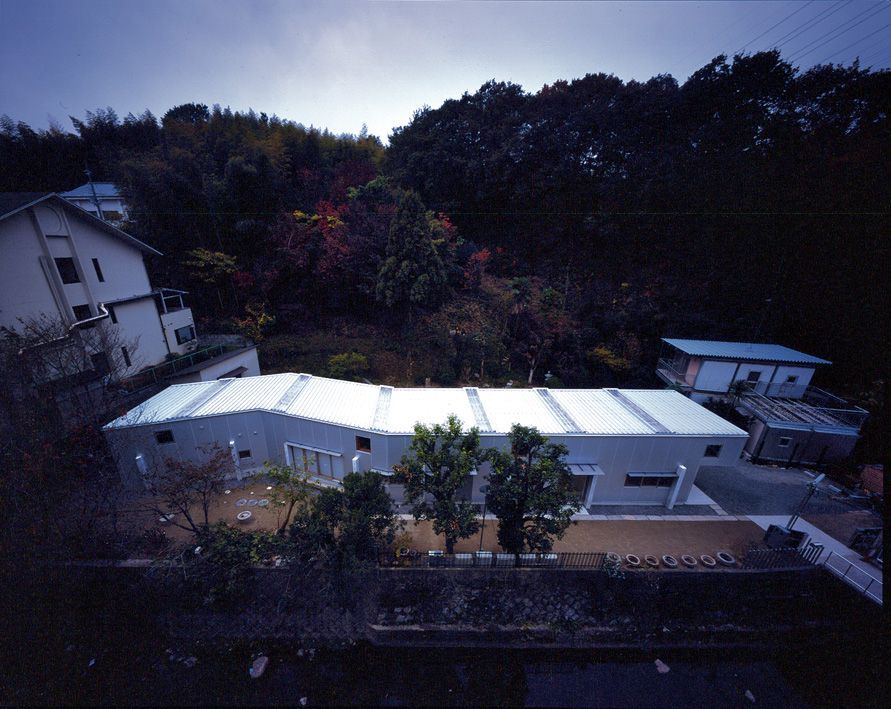 The site,located on the edge of agrarian community,is equally distant from Osaka,Kyoto and Nara, where a worm-eaten urbanization had been furthered for the last thirty years.Onto this site used to be a traditional,but superannuated,wooden house of 70-year-old,which we were asked to rebuild.
For the near term,a middle-aged couple whose children had left their nest,were to be living in the house.This vast space might not had been born,if the house was planned only for the couple-As is goes with all other architectures,the immediate users can be gone anytime.Thinking of a space which can be passed from people to people,this long house of 30metre -it is planned to extended to be 50metre after second stage construction! - had been created.
The slender space is again split into two slips. One slip forms a continuous room called “WHITE,”while another is called “BLACK” which consists of several small cells.

“BLACK”＝spaces each of which have only one respective usage.
Normally the name of the room indicates how it is used.
(ex. kitchen, toilet, bedroom, teaching room, conference room…)
“WHITE”＝spaces which changes its functions and name,
according to the users’ activities inside.

Usually,architecture consists only of “BLACK” spaces and circulations that connect those “BLACK”s.Though these “pure BLACK” architecture might seem rational,it actually is superannuated, to tighten people's activities.
The more functional a space be,the less the opportunity they are used for other functions. They are used only when the usage is adequate to the room. What happens when the usage / activity is changed? - abandon, or at best,renovation.
As is often the case with housings,Japanese housings,even the tidiest ones, also have private rooms for every member of the family. Accordingly spaces like living room and dining room where can hold more activities than private rooms become rather small.
Once they're furnished, there left no rooms for the resident,other than “have meals at the dining table” and “watch TV in front of the TV.” Are there any spaces for “any other activities” to happen? – NO.They are solid “BLACK” housings.

We wittingly did not make assumption how many people would live in this house.Instead,we supposed that people out of blood relations,such as “the wife’s sisters husband who become living alone” or “the couples daughter's family and her parents-in-law,” would appear in the future.For a while,the “WHITE” will be mainly used to welcome the couple's numerous guests, when each “BLACK” cells accommodate “old good things” from the long history of the family, personal hobby and utilities.
To be flee from the stereotype of the lifestyle of “Parents + children” or so-called nuclear family,“WHITE” space are needed for the housings.Unlike the pure “BLACK” housings,this house with 50% of the “WHITE” space embraces great potentials.
The “BLACK” cells are laid straight belong the river. To enable each resident in and out of the house without interrupting other residents, several entrances are installed to this side.
Also, they can go through the house using “back side” circulation that pierces all the “BLACK” cells. (so that you won't be embarrassed by seeing your Mom’s guests in pajamas!!)
To sum up with the enormous “WHITE” space,the circulation of this housing forms a loupe of 60metre.

The entire building delicately “turn”s on the east side.Space can expand,by giving an angle to it. For the hidden space beyond the bending point,people would unconsciously imagine an expanse of the whole space. Furthermore,when you see the space from slightly different angle,you'd be amazed by the drastic change of your view.This bending point,in short,stimulate people's activities and feelings.