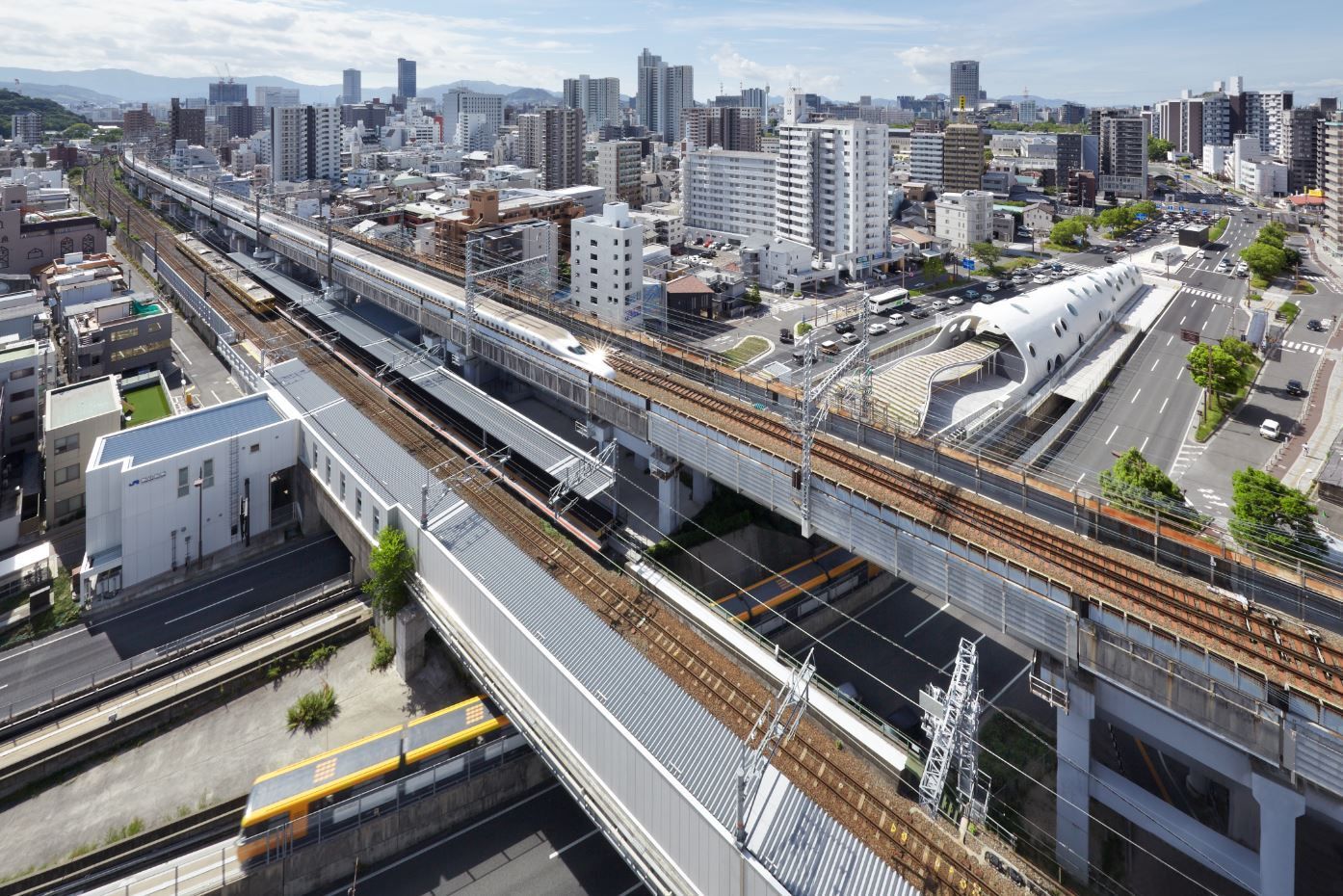 The project is the construction of Astram Line's New Station and JR Access Transit. It is planned to play a role as a "city gate" that stands between the central and suburbs of Hiroshima City.
The Astram Line, links the central area of Hiroshima City with the residential area of Asaminami Ward in the northwestern part （of the city）, goes through the delta region where the Ota River has the branches. It crosses the railways of the JR Sanyo Main Line and the Sanyo Shinkansen, which both run over the bridge. The Astram Line runs over the ground from the north side of this crossing point, but dives underground from the south side.
A long-awaited interchanging station for the JR Sanyo Main Line, Shin-Hakushima station, had begun to be planed since 2003 and opened in March, 2015.

The site is located along the Route 54. Located within a network of civil scale structures with a bridge and one-sided three-lane highways, the station is enclosed from the heavy traffic on both sides by cylindrical shaped shell. The shell consists of a three-dimensional curved surface of a ribbed steel plate with a thickness of 9 mm, which is determined from the footprint along road alignment and a cross section adapted to the flow of passengers walking between the ground floor and the basement floor.
This plan make each floors connected spatially and empirically; the platform located on the first basement floor, the ticket gate floor located on the ground floor.
The large and small circular openings scattered on the shell carry light and wind inside. Tempered laminated glass was filled in some openings, such as on the ceiling above the platform and the walking way for transfer. The inner wall surface receives the sun light which is cut in a circle.Light and shadow show different expression depending on time, weather and seasons.
As a result, we were able to realize a bright platform space filled with natural light, which is rare as an underground station.
In addition, the connecting passage is a place where various activities are born so that it can be used not only as a passage but also as Al Fresco Space.

The underground part is a concrete structure of civil engineering, and the upper part is a steel structure of construction, however it aimed to unify the boundary as much as possible.
The platform, located on the first basement floor, is a space seamlessly integrated with the ground, by wiring the station facilities under the floor and receiving the earth pressure of the box culvert on the track with the new U-shaped civil engineering structure.
This box culvert was embedded about 25 years ago in anticipation of the possibility of connecting stations in the future. In a sense, the construction became the plan of the connection to the underground civil engineering structure. Or it can be called a renovation or an extension, of the existing civil engineering space.
Both the civil engineering work of opening holes for the platform door, and the construction work of building a steel shell that will be the finish of the room on the civil engineering structure, became a highly difficult work.
The access way in a zigzag line to the JR station from the Astram Line station consist of a lightweight grid beam combining two 150 × 75 mm channel steels and a roof formed by scattered solid pillars. The roof, which is mostly overlooked from the second floor, is greened by the vine plants.

Since its opening, it has already been used by many people for commuting and attending school. We hope that this station can bring a rest to a part of daily life, transportation.